Marc Galang is just one more of our students that have landed a job after completing out Software Development program here at devCodeCamp.  Marc has recently accepted a position as a developer at Zywave, based in Wauwatosa, WI.  We sat down with Marc to ask him about his journey through coding and how his future is shaping up.

devCodeCamp: Since high school concluded for you, what type of schooling have you pursued?
Marc: I have a BA in Advertising from Marquette University. Getting that degree was what I thought I was “supposed to do” at that age, but it didn’t necessarily get me any closer to a career.

dCC: When you started devCodeCamp, what experience did you have with coding?
M: I did a previous boot camp in Chicago for iOS development. It was also intense, intimidating, and rewarding, just like devCodeCamp. One of the main differences between the two for me is that devCodeCamp is plugged into the Milwaukee market, teaching what employers here want in their developers.

dCC: What was your biggest take-a-way from devCodeCamp?
M: “Make it work. Then make it better.”
It’s so easy to change code so it doesn’t have to be perfect as you write it. But it should work when you are done, even if it’s not as fast, or as elaborate, or as pretty as you first imagined it. A working program that might someday be made faster and fancier is better than a fast, fancy program that might someday work. 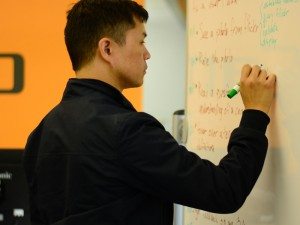 dCC: We understand you were recently hired by a local company as a coder. Can you tell us a little about what you will be doing?
M: I was hired at Zywave in Wauwatosa as an Associate Software Engineer. The first thing I will be doing is to soak up their culture. On my second day, the product development teams went to the Majestic theater for pizza, popcorn, and a private screening of the Fantastic Four. I thought at first that they might be hazing me, the new guy, to see if I would really try to go to a movie theater in the middle of a workday, but I was assured that it was legit and while it doesn’t happen every Tuesday, there are occasional activities like that that the company arranges for it’s people. When not doing that, I’ll be working on a team modifying, improving, and customizing the insurance software that is used by Zywave’s parters.

dCC: What excites you about your new position?
M: When I first started at devCodeCamp I didn’t know what area of development I would go into. We worked on a number of languages that could be applied to so many developer roles. As I started my job search, there are several things I’m excited about. First, we were learning at such a fast pace at devCodeCamp that I’m hoping to continue learning quickly as I’m exposed to more. The developers have the general attitude that it’s not the subject of the software that makes it interesting, it’s how they do it and taking pride in doing it well that makes the whole process interesting and exciting. And Zywave is currently in an expansion phase. They recently broke ground on a new building that they hope to have ready by next spring. I suspect the new space will express as much of their attitude as a Tuesday afternoon movie outing does.

dCC: What are your plans for the future?
M: I tend to be faithful to employers if they are good to me so my five year outlook has me at Zywave, taking on new responsibilities and challenges as I earn them. But even after only a few years, I expect to be much more marketable in case my career requirements and expectations change. There are a number of personal projects that I want to continue, some of which were started at devCodeCamp, so that will be ongoing, too.

dCC: Do you have any advice for future students of devCodeCamp? Or What would you have told yourself 5-6 months ago?
M: I think the kind of person who can devote him/herself to the intensity of dCC is the kind of person who doesn’t heed a lot of advice, but instead has to live it to learn it. I know that’s how I was when I started and I’m sure I still am. So advice I wouldn’t give, but I can say that for me it was all worth it. The time, the expense, and the struggles have paid off, both in the little victories in learning along the way, but also in the opportunities that lie before me now.

We congratulate Marc on his new coding career at Zywave, and wish him the best! Have you thought about what is your next step to a solid career in coding? Take a tour of devCodeCamp and see where your path will lead you.