Learning how to code a project from scratch takes an immense effort, but doing so while coming up with an original design and integrating an application programming interface (API) into the process is what sets devCodeCamp students apart from the rest. In just five days, fully immersive students Coul Schmitt and Eli Rapkin went from having no knowledge about the Salesforce API or how to build a project in ASP.NET to completing a functioning product that has the potential to revolutionize the way businesses figure out the best time of day or night to reach clients.

The product, which has the ability to be monetized as a subscription service or an additional application for a related product, will quickly record information about a call to give businesses a better idea of who their clients are. The data includes the call time and whether or not the person was reached. The two pieces of information provide useful statistics for a business. For instance, knowing the best time (morning or evening) to reach a client will directly lead to a company making more efficient business decisions, which has the likely scenario to lead to more revenue.

The requirement to use the Salesforce API to solve a real world business problem began as a challenge for Coul and Eli. In fact, there were a few challenges to overcome. 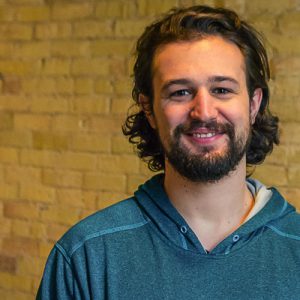 devCodeCamp graduates Coulthurst Schmidtt took on a Salesforce API during their bootcamp experience. Coul has since accepted a position as a Web Developer at iNet Solutions while Eli currently works for Trisept Solutions as an Associate Software Developer.

“Coming up with an algorithm that could be easily expanded on as well as work well with what we were trying to do in a short period of time (was a big obstacle to overcome),” Eli confessed.After they spent the first day of the project week to come up with the creative idea, they quickly realized that the Salesforce API was a useful tool to design a business application. Even more impressive was the project was written with the idea to be integrated with any type of business. Not to mention, Salesforce can track client type and business type, which opens the door for all sorts of possibilities in regard to their product.

Coul and Eli tackled different parts of the project to ensure their time would be spent wisely. Of the many skills that are obtained at devCodeCamp, the ability to come up with a unique idea, work under intense pressure, and divvy up the necessary tasks for the plan to come to life are incredibly useful. More importantly, both students were pushed to the brink and came out with different passions for the development process. It goes without saying that building a project as advanced as the one Coul and Eli created goes beyond what either student believed was possible when they began the fully immersive program.

“I did not think we would be doing something like this in Week 9 and that it would turn out as well as it did with only five days to work on it. It shows how far we have come in such a short time,” Eli said. “Every single week there is a feeling that there is no way we are going to finish the project,” Coul elaborated. “By Monday it seems impossible, by Wednesday it still seems impossible, and by Friday we accomplish our goal.”

Even better was how Coul and Eli felt about the progress they have made since they arrived at devCodeCamp in early September.”The only experience I had with code before this was dealing with XML at my previous job. To go from that to where I am now is incredible. To look at code and not see it as another language but something that I understand is a great feeling,” Eli stated.”I never thought I would be able to do the things I can do now nearly three months into the program,” Coul revealed. “Understanding the vocabulary and implementing the concepts the way I can now.”