Space travel today looks a lot different than it did five decades ago. Long before the modern day glimpses into the future with passenger space trips and life on mars we hear about so often today, the country was fueled by the hopes of President John F. Kennedy to reach for the stars. But more importantly – be the first to land on the Moon. Before the 1960’s, space travel only existed in science fiction books and movies. The actual thought of reaching the stars was only a daydream for children playing in their backyards. But when the late 1960’s rolled around, the daydream became a reality. On July 20th, 1969, Neil Armstrong, Michael Collins, and Edwin “Buzz” Aldrin landed on the Moon aboard the Apollo 11 spaceflight. The footage that was captured from those moments are still culturally and historically relevant today while being a permeant topic in American history classes.

The end result was one of the largest successes the country ever achieved. But that doesn’t mean it was an easy win to get, especially in the moments leading up to the day. NASA estimates a massive 400,000 Americans were involved in the Apollo program workforce during its height. Those men and women worked tirelessly to make us be the first ones on the Moon. One name that stands out of the behind-the-scenes work leading up to the flight, is Margaret Hamilton. Margaret led the team responsible for programming the on-board flight computer, named officially the “Apollo Guidance Computer.” This computer is historically responsible for being one of the direct reasons the Apollo 11 mission landed successfully on the Moon after a mistake astronaut Buzz Aldrin made moments before the landing was planned. If it wasn’t for Hamilton’s code and leadership, history books may be a little different today in classrooms. This is how the aspirations of a country and President, the hard-work and dedication of a team, and one Software Engineer’s brilliant lines of code landed us on the Moon in 1969.

Who is Margaret Hamilton? 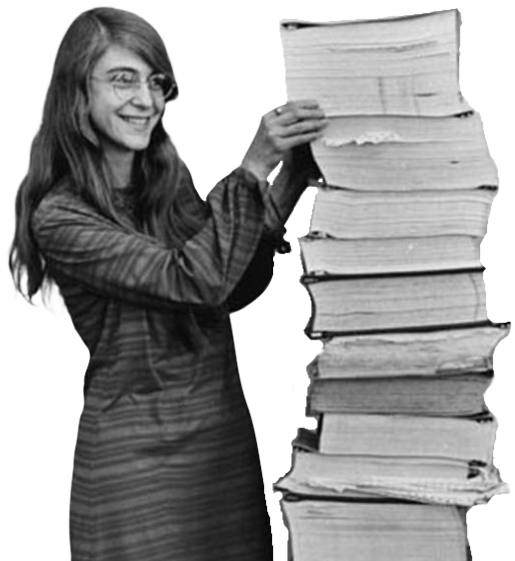 Hamilton’s name is deeply embedded in the world of coding. If you think helping astronauts land on the Moon for the first time isn’t a cool enough reason to go down in programming (and American) history, she’s also the first person to coin the term “software engineer.” She studied mathematics and philosophy at Earlham College in Richmond, Indiana where she graduated in 1958. Shortly after, she accepted a job at Massachusetts Institute of Technology (MIT) where she began programming weather predicting software. A few years later in the early 1960’s, she joined MIT’s Lincoln Laboratory where she wrote the software to a program that identified enemy aircraft for the first U.S. air defense system.

This progression in her studies and career landed her (no pun intended) at the doors of MIT’s Instrumentation Laboratory, which at the time supplied NASA with technology. She was placed as team lead overseeing the software creation for the guidance and control systems that would be implemented in the lunar modules and in-flight command for the Apollo missions.

Because Hamilton’s incredible achievements as a software engineer, she has been the recipient for many prestigious awards and honors over the years, such as the Presidential Medal of Freedom and NASA Exceptional Space Act Award. Her name and work will forever be attached to the massive historical event of the first Moon landing – and for good reason.

How a Software Engineer Changed History

Hamilton’s team was responsible for programming the Apollo Guidance Computer. This piece of technology was groundbreaking – through its idea and execution. The basic concept behind it was to push priorities for astronauts to see clearly in times of need, in order to prioritize power consumption at the correct moments. If there was something running more power at that specific time that would potentially take away the needed power later on in the flight, the astronauts could then address the situation in real-time and make those changes – and Buzz Aldrin did just that.

Moments before the expected landing was planned, something was overloading the computer on the spaceflight and put the astronauts in a bind. They had only a few seconds to make a life changing decision – figure out the problem or abort the landing.

As the astronauts manned their stations to overlook the errors they were receiving, Aldrin realized he flipped the rendezvous radar switch. This radar would play an essential part for the descent back to Earth. But at this very moment, it was demanding too much power and eating up computer resources that were vital in the planned landing on the Moon. Hamilton’s Apollo Guidance Computer was there to process this crucial problem and reveal the data back to the spaceflight team. The computer gave the option to continue using the power from the rendezvous radar or to switch the power priority to the landing steps to continue the planned landing on the Moon.

The choice was made. A few lines of the wrong code could had resulted in a few lines changed in the history books we read today. But thanks to Hamilton and her team of software engineers, the Apollo 11 mission was a success and helped put mankind on the Moon for the very first time.

The Importance of Code

Margaret Hamilton’s outstanding talent changed the world as we knew it. Her coding played a part in laying the groundwork to the space travel we know today. The importance of code will always be there. Today, the work of developers is a part of our everyday lives. We are surrounded by lines of code everywhere we go. From the phones in our pockets to the stoplights guiding our drives home. We depend on the work of developers every day to make life safe, convenient, organized and consistent.

When Hamilton designed the Apollo Guidance Computer, the room for errors were tiny – but expected. Especially because of the era it was designed. There was a limited number of resources available where Hamilton’s team could learn from or build off of. It was during a time when lines of code could only be found every once in a while, and computers that ran less processing power than our cellphones took up entire rooms to fit. The team had to dissect and create the code from practically scratch knowing the results of a single misstep could result in tragedy.

Today, we are able to live in a world where there’s plenty of avenues to learn coding. Even though we are fortunate to have almost unlimited resources available at our fingertips, the opportunity to change history will always be there. At devCodeCamp, we help shape the future by taking people from an array of backgrounds and transform them into developers in as short as 12-weeks. Even though Margaret Hamilton was unable to have as many resources around her when writing code, it’s powerful to imagine what she would be able to create if she did. Anyone is able to achieve greatness. devCodeCamp takes immense pride in handing the needed tools to future developers and watching as they go on to write code as their full-time jobs.

Creating groundbreaking code from scratch or building on an already existing idea will always have a place in history. Hamilton put mankind on the moon with lines of code. And with technology being miles ahead of what it was over fifty-years ago, anything is truly possible. What will you create?

Reach out now to see how to get started in our online coding bootcamp.